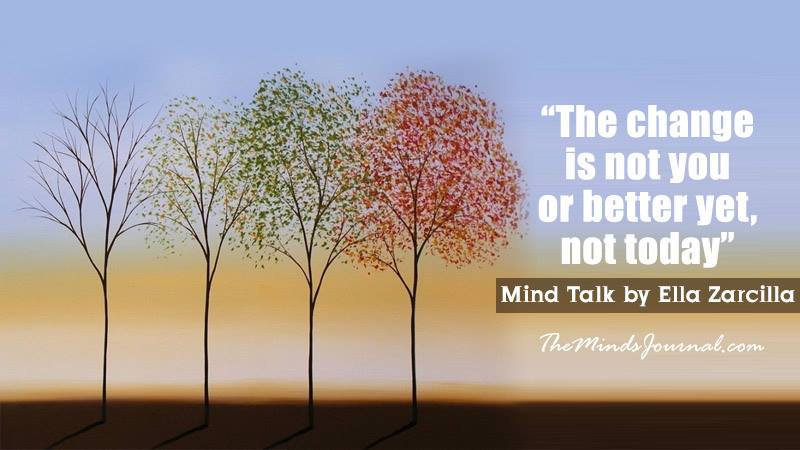 “The change is not you or better yet, not today” – Mind Talk

Someone’s father told her, “be the change, be changed today, and act now”, but there were scenarios that those motivation can become fallacies. The perspective of one’s view will not be enough if we are not that wise to understand that the term itself is a trick.

Change is something not easy to neither achieve nor accomplish whether we believed on someone’s faith or with something captivating about one’s culture— it should take selfish demand on time and process alone. Yes, there is no permanent in this world except for change but when our passion becomes our ego, we can be lost. It should not favor our conceited persona or should not even favor the hatred that we have inside to reason out, to pursue and act on the change that we want.
We are the master of change but change should not be our master. If one day, we become her servant then from the beginning you and I are mistakenly following the pattern that was given by many. If change helps us to achieve greatness, why are we still here, talking like a clanging gong? A person’s histories define it as bloody but in the realm of open-mindedness; we can acknowledge it as pity.

Ella Zarcillahttps://secondvoice29.wordpress.com/
An introverted woman, a writer and a weirdo.
- Advertisment -