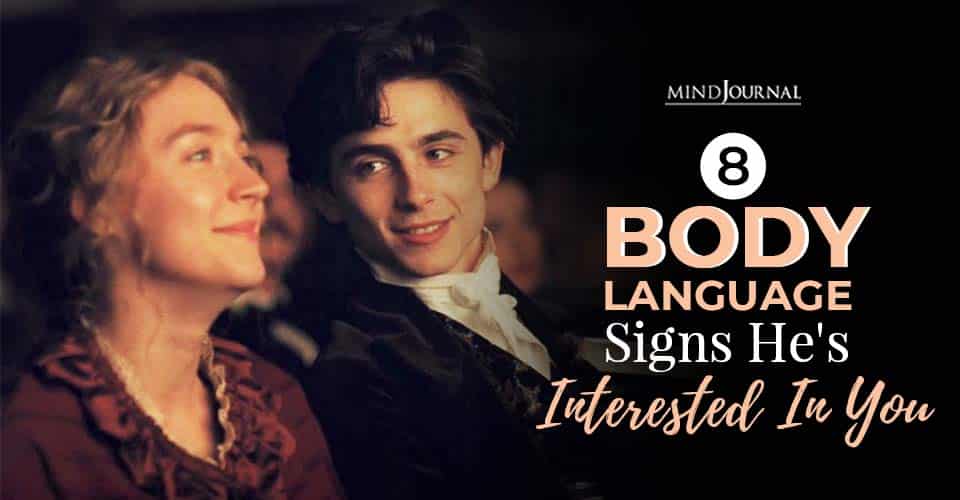 And you’ll probably notice that he can’t keep his hands still either. He’s either ramming his straw in his drink, chewing his lip, tapping his foot while he’s seated, twirling a pencil between his fingers, or running his hands through his hair.

If you’re noticing any of this, try to put him at ease. Trust me, a little encouragement goes a long way with a guy.

Once he knows he’s still in the game, he’ll eventually overcome that awkwardness and sweep you off your feet.

Body Language Sign #5 – He tries to look his best.

Look at the way he’s standing in front of you. If he appeared laid back and relaxed before you showed up, he might suddenly act like there’s an invisible hanger in the back of his shirt.

Aside from that, he’ll be showing off his glorious pecs by sticking his chest out.

He’s unconsciously broadcasting his masculine features in the hopes of getting your attention, not unlike peacocks who flaunt their feathers to attract a mate.

You might even catch him fixing his hair or smoothing out his shirt with his hands if he knows you’re nearby.

I call it the “Drill Sergeant Effect”: when you walk by, he’ll snap at full attention and wouldn’t dream about disappointing you.

Body Language Sign #6 – Everything else fades into the background.

You know how it is in cartoons or movies when the guy’s love interest is talking and he’s practically hypnotized from watching her lips move?

Meanwhile, the poor guy’s sitting there, mesmerized. He couldn’t find a way out of her eyes even if he had a map!

So what I’m trying to say is that you kind of have the same effect on a guy, and it SHOWS.

He’ll make you feel like you’re the most important person in the room.

Well, that’s because you ARE that important to him, and he’ll be hanging on to every word you say. It’s like nobody else is there because you have his FULL attention.

No, he’s not going to try to win you over by singing and dancing like a certain boy band.

Ok, semi-funny jokes aside (you chuckled a little, admit it), a guy in love will try to match your pace in a couple of crucial ways.

First, he’s going to walk alongside you at a slower pace.

This might be a situation where you ran into each other by chance, or you’re both headed in the same direction for some reason (like running an errand together or something like that).

Whatever it is, he’s likely to mirror you and adjust his speed, usually by slowing down.

According to a Seattle Pacific University study entitled “Energetic Consequences of Human Sociality: Walking Speed Choices among Friendly Dyads”, men have generally evolved to either speed up or slow down for their partner so she doesn’t have to waste any precious energy.

That means is that he’s doing this for your benefit, and it’s a privilege reserved only for YOU.

And here’s another interesting tidbit about sexual attraction: he’s going to try and match YOUR body language as well.

He’ll be doing what you do, like leaning forward when you’re sitting across each other, or have his hands on his hips like you while standing up.

For instance, he’ll start using your favorite expressions – that’s him subconsciously expressing his desire to establish rapport with you.

That way, you’ll feel more comfortable around him.

Related: Vulnerable Ways A Guy Acts When He Is Interested In You Based On His Zodiac Sign