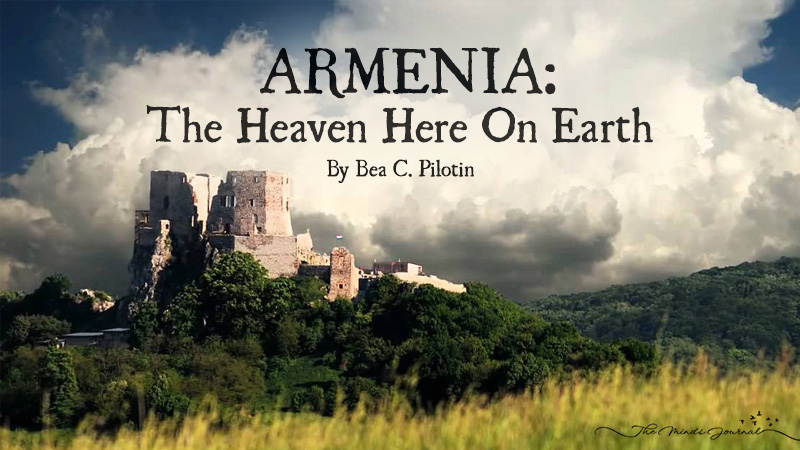 ARMENIA: The Heaven Here On Earth

The walk continued straight to the Opera House, the Southern quadrant of France Square merges with its surroundings recreational area. Designed by renowned architect Alexander Tamanian and it stood as one of the best and most real examples of Soviet architecture. Obviously, Tamanian combined two auditoria in one building with one roof over two stages. The Opera House was opened in 1933 and three years later, Alexander Tamanian was awarded a gold medal at the International exhibition held in Paris. The theater was named after the Armenian composer, Alexander Spendirian. He was the first one to perform at the Opera House. From this place, I walked down Northern Avenue to return to the heart of Yerevan, Republic Square completing the Eastern part of the walk around Yerevan. I looked around the place, it’s built with a beautiful pinkish tuff which they called it an Armenian traditional stone that has an awesome beautiful combination especially when the sun is ready to set in the afternoon. It’s so widely beautiful. What took me by surprise were those little fountains that were seen everywhere. They said it’s a spring with pure transparent water if you’re in the mountains, or the famous “pulpulaks” which you can find almost on every street and yards in Armenia. While I was taking a bow to drink on the unique one-meter-high bubbling jet, a friend of mine said, the country has a special attitude to water even since the great civilization of antiquity. The people, who fought with a rock day after day for a piece of bread, worshipped the water. And centuries ago, when mutual respect was valued of gold weight, people often built on road springs with drinking water and carved on them the following phrase: “TRAVELER, STOP AND TAKE A BOW.” The Armenian plateau is rich in water resources. It’s a unique hydrographic unit, which has hosted four major rivers of Asia: the Euphrates, Tigris, Araks (or Yeraskh – Armenia’s mother river) and Chorokh that, according to the Old Testament, are the four sacred rivers of Eden.

I stared on that giant stairway that linked the downtown Kentron area to the City. So attracting, I wondered. From the top of Cascade, the beautiful view overlooking the Yerevan City, 16,854 ft. Mt. Ararat and 12,782 ft. Little Ararat. It’s the place where I felt so safe and where I could think about life. I could clearly see from where I was standing the snow-capped and dormant compound volcano. It was associated with the “Mountains of Ararat” in the Bible. It was the traditional resting place of Noah’s Ark according to the Book of Genesis. The main national symbol of Armenia and it’s considered a “Holy Mountain” by Armenians.

On the other sad place, I visited the Armenian Genocide Memorial. Before I decided to finally go there, I have done some quite reading about it and I had mentally prepared myself for the museum. However there were three things I was trying to forget: Photos of starving children and brutally murdered; of the old men and women thirsty and died with hunger and slaughtered in cold blood; and photos of a massive blood stain everywhere. From the museum, a broad pathway flanked by a 100m- long wall engraved with the names of massacred communities leads to the memorial, which was built in 1967. It consists of a 40-m high spire next to a circle of 12 basalt slabs leaning over to guard an eternal flame that they dedicated to the 1.5 million people killed during the Armenian Genocide. These 12 tilted slabs represent the lost provinces of Western Armenia. While the spire has a fine spilt dividing it into larger and smaller needles, the smaller one representing Western Armenia. I stared at the monument, then, I began to imagine the eyes of those victims begging for compassion. And felt the weight of pain and sorrow in my heart. I felt hatred and despair. I wanted to cry about those subjugated people, whose human rights were stripped away by horror. I picked one piece of taraxacum, cusped it in my hands- with my eyes closed and whispered, “May all of them rest in peace!” then blew the spores away. On the ground, there is a stand of cedar trees planted by foreign leaders of the different countries who used the term genocide to describe the event that occurred. I left the place with misty-eyed and heavy heart. Yes, a place where one can feel the pain- that when you turned your back to leave the place, you would never wish of looking back again. You just want to walk away and leave.

Bea Pilotin - Writer
A woman who is passionate about coherent words.
- Advertisment -