A Story That Never Started 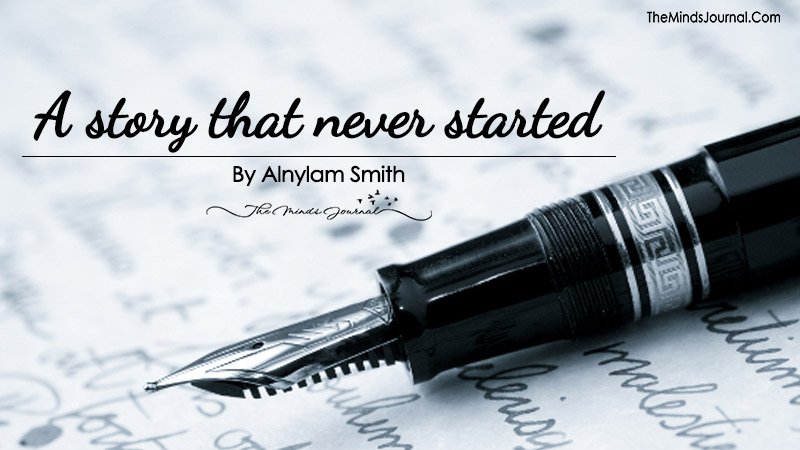 The words which had formed this story had to go through an incredibly long and difficult journey in order to possess one insignificant human mind. When they left the unseen world of their own we are justified to believe there had been much many. Unfortunately, the inspiration which carried them to the piece of paper got bored in the way and started to eat the words one by one.

With no option but to scream their meaning, words sometimes lost their voices. Love used to kill them too, for when it got too deep, it didn’t need words to express herself anymore. Who owns those words? I can’t tell not even now after they have been in my mind for months. They might belong to a girl with brown eyes, they might be the property of beings who don’t need to breathe or they just can be a part of each other’s souls. It depends if you let them or not.

No matter the eyes which lean on them, the words will build the story, an ancient one, which used to be painted by Helios, the god of the Sun, with yellow and orange shades of sunset light, on the still surface of the seas, for they were legitimate kids of the ocean and therefore entitled to know the truth about their father and how he was born. So that’s what you might have read if you had struggled to read the lines of light bedded on white, foamy waves.

Once upon a time, a little cloud was sad. Sad of all the hate he saw on earth, sad of how humans chose to hurt each other and took great pleasure in it. His agony changed something in him. So much he wanted to help the poor souls leaving underneath his eyes to rediscover how much pleasure it is in only appreciating the beauty in others, always helping them to grow instead of digging deep holes in the wall they build to touch the stars one day… so much that he let one tear fall.

And one tear became ten, ten became a hundred, a hundred became a thousand and then his tears couldn’t be measured any more in numbers, but in time. One second it took for a tear to fall on the dry land. With every minute a huge blanket of tears was being created, one that was so hard for the land to carry, that it sank a little in itself, allowing the cloud to have his wish completed.

This is the story of the first ocean. It was born in order to separate people, so they will realize how much they forget to love. For only we appreciate something after we lose it. And so people started crossing the ocean to win back their loved ones. However, so many hearts were broken, cause the ocean brought a terrible disappointment for those who never were searched.

It is understandable that people started to hate the ocean. As if it was only his fault that they lost their love. But what they didn’t see, was that the ocean only stood, waiting for them to try to cross him, in order to reach the other shore. But people preferred to blame him and sink in depression since it was easier than to fight in order to be worthy of what they lost. They only judged the ocean, placing ugliness in each shadow of his waves. So the ocean got sad. And from time to time, he couldn’t bare it anymore and he had to let the pain come out.

Storms would hit then, powerful enough to kill whoever was trying to cross him in their time. The ocean would talk to the clouds to hide the sun for only a short period, for he loved the sun and didn’t want the bright star to see him wild. He would then start crying, the wind coming to support the waves. The touch of wind would make the waves grow higher and higher until clouds could kiss them, help the ocean regain it’s calm.

But Fury wouldn’t be gone, it will just grow stronger and stronger until no longer clouds could hide the sun and mourn the pain of their friend. With the rays of the unknowing sun reflecting into him, the ocean would be calm again and people safe to cross him. But they didn’t know what his depths hide. What beauty lies inside wouldn’t matter for the people now feared the ocean and hated it more. And every hateful word would make him deeper and darker. But people didn’t care, as long as the illusion they created helped them escape the guilt of not even fighting for their love.

Therefore, for the ocean, it was sometimes incredibly dangerous to stay only by himself. For his depths were hiding a darkness he couldn’t understand, so he feared it. Everything in his surrounding world had a meaning and a scope. Except for the ocean’s darkness. It only existed, as one secret place where no life could grow. Nothing but cold, still, threatening, overwhelming water.

But the depths scared the ocean for a more specific reason. In them, it stood written the story of his moments of anger, each leading to a mistake.  He sometimes thought he was born on this earth to suffer, without knowing that every single being had its dark side, unaware of people’s everyday struggle to fight the darkness of their own, expressed not in amounts of deadly water, but in thoughts.

But not only the ocean couldn’t understand the people who kept crossing their destinies with his, but he was blind to any story of the ones of his kind. So he missed the unspoken words of the land. What started as a compulsory acceptance of what the ocean represented ended up in a tumultuous journey of discovering him. The land was inside the ocean, but she seemed to be unaware of that.

Blame his eyes who couldn’t break through the illusion of the superiority of the ocean.

So spectacular the land saw him, that she could not even imagine she was important to him. From times to times though, she seemed to remember she was anchored in his deepest self. When she comprehended that with her mind, she would understand she actually touches only a little part of him; that from a mirror, she holds in her hand only one tiny piece of glass that the ocean gave her. And she had no guarantee he would give her more, in no way she could know she will ever have completed the puzzle so the moon rays will reflect into him straight, not even a bit modified by how she would arrange the shards of him.

Also if once upon a time the stars would smile a thousand through him at her, will she be still who she used to be? Or will the shards have cut deep into her, changing her? She couldn’t know. She was seated at the table with Time, trying to catch a little glimpse of the unknown which hid from her in the shadows of the King of Moments. The way the Time looked at her was spooky and got her feeling a chill deep down, in her heart.

She was afraid to fight the King, for all she could do against him was to wait, but that meant she agreed to spend the eternity with thoughts of sweet, deadly fantasies. And only if her soul wouldn’t be greedy enough to want the projection of the fantasies materialized in reality… then maybe she would wait. Maybe she would just play another game with the King, allow him to feed her with unmet dreams, but she couldn’t.

So for the first time, she didn’t play along with the game. Breaking the rules though was the end and the beginning, for she started to comprehend with her heart that she was sustaining him. And with that only thought dancing in her mind, lighting every single corner of her memory, she would foolishly think she is what keeps him alive. Oh, and what a cursed belief… for it made her fell in love with him, in a way she couldn’t understand nor admit.

He was the ocean. She was the land. They used to be melted together. One without the other they couldn’t exist and together they allowed miracles to happen. You may think that this is a happy love story, but it is truly a tragedy. For the land loved the ocean so much it dived in its depths, left behind the light of day, in order to allow the ocean to live under the sun. The sacrifice made by one side was supreme. While the other only took it as if it belonged to him from the very beginning.