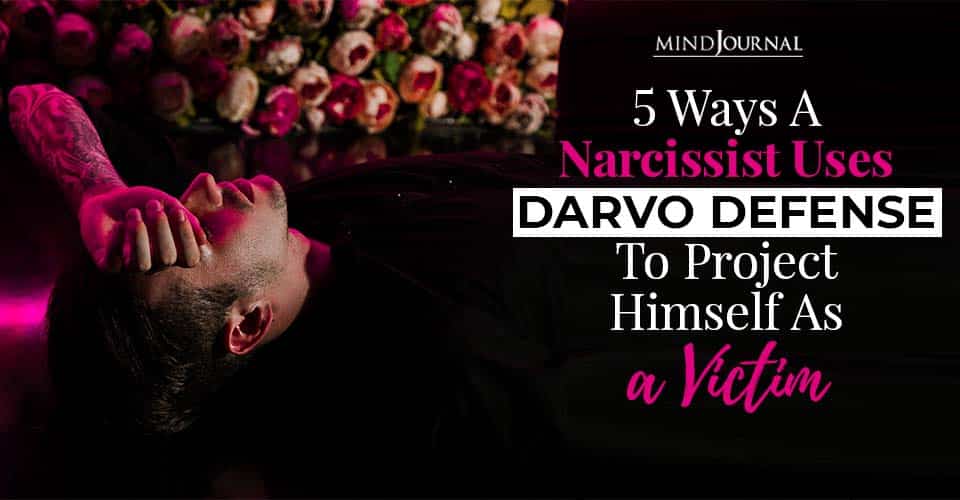 There was the guy who, caught cheating on his wife, asked her, “What about you sneaking cigarettes after you told me you quit? What about your dishonesty?”

While this is a false equivalence, it can be difficult to argue the point with someone who is always right. If you present any hint of negative feedback — “I thought you were going to take out the trash” — no matter how small, the DARVO cycle begins.

“Why is the trash so important?” he responds. You have made a big deal out of nothing. You are obviously not adoring enough. You are clearly the offender here.

If these things are starting to sound familiar, you’re probably with a narcissist who will DARVO you to death if you allow it.

Narcissism occurs on a continuum.

There are slightly narcissistic people. These are people who think they might be the smartest person in the room. They can be annoying, but also fairly harmless. You can make a case to a person like this that a 7:00 bedtime for a 10-year-old really doesn’t make sense and lay out the points so he might eventually agree.

Sometimes, he’ll remind you what an inconvenience it is — that it was your idea and that, whenever possible, you are the one who must be inconvenienced by it, not him. This is a narcissist you can probably work with.

Related: 8 Types Of Toxic People You Should Leave Without Feeling Guilty

At the other end of the continuum are the narcissists who “know” they’re always the smartest person in the room. Their needs override the needs of everyone in their orbit. You cannot discuss a change in the 7:00 bedtime with him because it’s an inconvenience for him that will not be tolerated under any circumstances.

Don’t be fooled by his crocodile tears; the true narcissist doesn’t really need you. Since he is probably charming and engaging, he’ll quickly replace you with a more compliant, adoring substitute.

At this extreme end of the narcissism continuum, you are not going to gain any traction with your clearly argued points or with reason.

Unless you want to spend your life feeling like a victim and with someone who only sees you as an accuser, it’s time for you to reverse things and free yourself of his manipulative DARVO defenses. Reverse course and run for the hills.