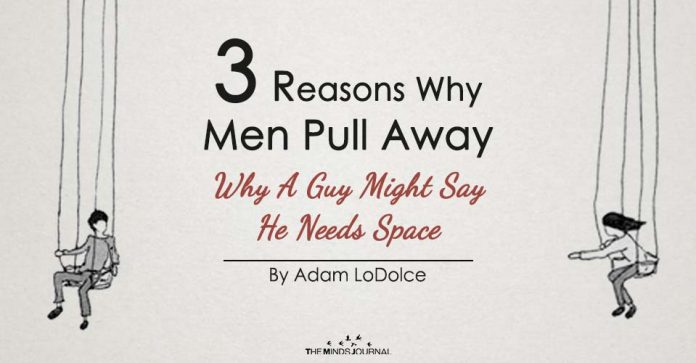 3 Reasons Why Men Pull Away: Why A Guy Might Say He Needs Space

Reason #2 Why Men Pull Away: He’s Unsure of How to Transition to Commitment

He may not know how to express his true feelings.

While the first reason had absolutely nothing to do with you, this one does, but it’s a good reason why men pull away.

And that freaks him out.

So what does he do? What any man would do. Pull into his turtle shell while he figures out what the hell is going on.

One minute things are all casual, and now I can’t get that girl outta my head. WTF?? Are my days of being a swinging bachelor drawing to a close?

If he’s already started having real feelings for you, not to worry; he’ll come around. He just needs to work through how his perspective of your relationship has changed as his feelings have increased.

He may worry that getting serious with you will nip his independence, so he may suddenly start making plans with his boys more than usual. Certainly, he should keep spending time with them, even as you move into a long-term relationship. Let him know that you want him to always have separate interests from you so this doesn’t scare him so much.

He may pull away because he worries things are moving too fast. If they are, reassure him that you’re willing to take things slow. Because: if it’s real, it’s worth taking your time.

If he’s been burned in the past, he may pull back because he worries about being hurt again. Understand that it can take time to let go of pain from past relationships. Be patient, but also encourage him to talk about what worries him.

He may not know how to talk to you about his fears, so maybe open up about your own. You’re probably scared of getting hurt. Of caring more than him. Of repeating past mistakes. Tell him, and he may find it easier to share in return.

Reason #3 Why Men Pull Away: They’re Ready to Move On

He may be ready to move on.

Now, I know this is the reason why men pull away that you don’t want to consider, but if it’s the one that’s ringing true for your situation, it’s better that you know now so you can move on with your life.

So you can’t be hurt if this guy is pulling back because he’s already figured out that the two of you are not written in the stars. You’re less Romeo and Juliet and more Brangelina. Less Barack and Michelle and more Ike and Tina.

It’s better for your relationship to end on a relatively good note than to wait until it deteriorates into fighting, lying, and misery.

This guy is doing you a favor, really. Yes, it sucks, and it hurts your feelings because you thought there was potential there.

But it takes two to have a loving relationship. If he doesn’t see that there’s a future with you, then he’s absolutely right. The sooner you can accept this, the sooner you can move on and find the one guy who’s waiting for you.

Most men won’t be brave enough to have a sit-down conversation about why you’re not compatible, especially if you’ve only been on a few dates. This guy may opt to ghost, because, in his mind anyway, it’s less messy.