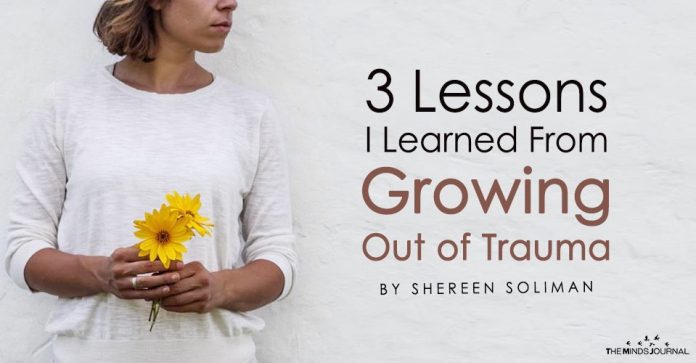 3 Lessons I Learned From Growing Out of Trauma

In a recent situation where I was starting to become vulnerable with a man I found myself judging, blaming and becoming angry with him, I didn’t even realize that I was doing it until a friend pointed this out to me. So I decided to address it like all my other triggers. When I did this, at first I found myself in tears. I was terrified. I was scared that if I let someone into that vulnerable emotional space that something awful was going to happen to me and that I would experience all the emotions from heartbreak, attempted rape and the death of someone close all over again. I desperately did not want to feel all those emotions in that intensity again and I was terrified that this situation was headed that way. Having got to know my triggers very well, I know that they create a whole world of illogical scenarios in my head based on a couple of situations in my life and during those moments of fear I remember what those scenarios feel like which causes me to back out fast. The reality though is very different because the past doesn’t determine the future and the trick is to remind myself of this reality when I’m experiencing what feels like very real occurrences. Practicing that continuously is what has allowed me to grow out of trauma into a more authentic and stronger person than I was before. The next time you find yourself bearing way from something, as yourself why? If it comes down to fear then it could be an opportunity for growth too.

Anyone who knows about Brene Brown’s research on shame and vulnerability will already know that vulnerability is where human connections thrive. I’ve watched her TED talks, I’d read the books but what I hadn’t done is really practiced what she preached when it came to vulnerability and to be honest, it’s because I wasn’t aware that I didn’t know how to be vulnerable. To be completely honest, I thought I knew all about the vulnerability before I experienced my traumas but in reality, I was running away from all negative feelings in my very privileged and somewhat entitled life, without the awareness that I was running.

So when I was faced with so many difficult situations I got to experience first-hand what she meant in The Power of Vulnerability, especially when she explains about those vulnerable moments:

When I was on the receiving end of these situations I appreciated the friends who called me and said “I don’t know what to say”, over those who just avoided me altogether because we could at least converse over the fact that neither of us knew how to deal with the situation which meant we were in it together. I also did this with the vulnerable situation where I acted reactively with the guy I previously mentioned after I had become vulnerable. I explained that I was terrified and that I didn’t know how to handle the situation and because of that I had pushed him away. In both these situations, I found that communicating the very observation of the feeling led to me becoming a lot closer with these people and that is the start of practicing vulnerability.

Shereen Solimanhttps://www.shereensoliman.com/
I'm Shereen, a traveler, deep-thinker, and explorer of all things inside and out. After experiencing some traumatic incidents which took me away from my nomadic lifestyle, I made it my mission to get back to living free and fearlessness no matter what. I write about what helped me process all the traumas, how they've changed my life (for the better) and why steering your own recovery is the most important thing you'll ever learn. Feel free to reach out to me via www.shereensoliman.com or www.traumaontour.com, happy exploring
-Adverts-