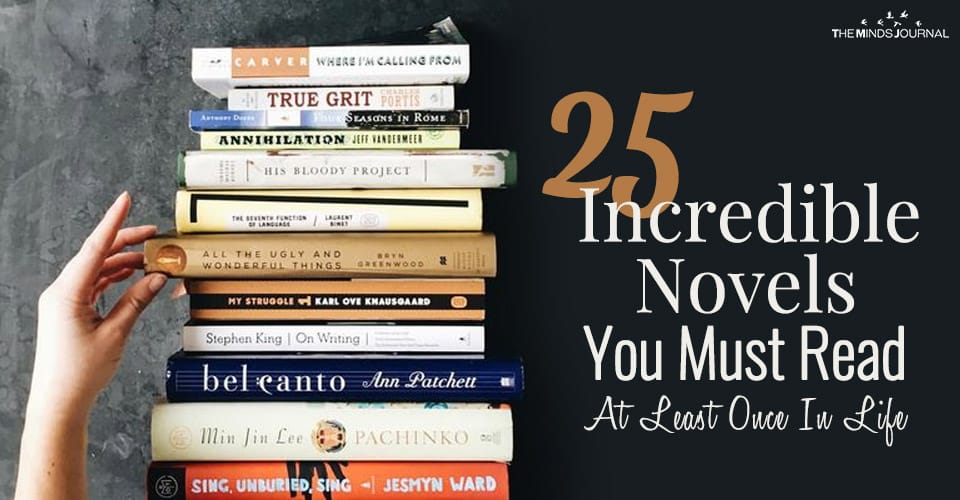 16. The Girl Who Fell From The Sky by Heidi Duro

This must read novel tells the story of Rachel, the daughter of a Danish mother and black father. When Rachel, her mother, and her younger brother fall nine stories from an apartment building, Rachel is the only survivor, and she’s taken in by her black grandmother in a predominantly white Portland neighborhood. With her brown skin and blue eyes (a white girl’s eyes in a Black girl’s face) Rachel faces the challenge of learning what it means to be biracial in a black-and-white world. Duro offers a masterful novel that interrogates the cultural construction of race in America and challenges us to confront our own prejudices.

A prevailing pop culture icon since her debut in 1996, Bridget Jones has been a symbol of everyday feminism for women all over the world from the UK to Japan. Her self-deprecating, candid cataloguing of dating and dieting debacles, her struggle with body image, and her desire for personal and financial independence resonates with readers because we’ve all been there at some point in our lives. Humorous and heartwarming, Fielding’s novel offers comical but critical commentary on what it means to be a woman in today’s world and reminds women (and men) that feminism is less about bra-burning and defying marriage statistics and more about standing up for yourself and loving yourself just as you are

A well-known abolitionist novel, Uncle Tom’s Cabin is a political and puritanical indictment of American slavery. Stowe weaves together the stories of several slaves from the fierce Eliza who will stop at nothing to rescue her son from being sold to the meek, modest Uncle Tom who bears his burden calmly and quietly, serving his masters with the faithful honesty of a man for whom freedom is as much a state of mind as a physical condition. This is a novel about the endurance of the human spirit and the moral obligation to fight for right.

19. The Bell Jar by Sylvia Plath

The Bell Jar is a hauntingly realistic novel based on Plath’s own life and tells the story of Esther Greenwood, a talented young woman who gains a summer internship at a large New York magazine and discovers that instead of enjoying the glamorous New York lifestyle, she finds it frightening and disorienting. Lifted from Plath’s own struggle with depression, the Bell Jar is an authentic look into the human psyche and sheds light on the realities of mental illness.

A classic work of Victorian Children’s Fiction, this is a whimsical tale of magic and nonsense in which Alice finds herself in an imaginary world after chasing a white rabbit she sees while sitting quietly on the riverbank. Opening this novel invites you to fall down the proverbial rabbit hole and into a world of talking animals and magic mushrooms that cause Alice to grow or shrink depending on which side she eats. This must read novel has delighted children and adults alike with its blurring of the boundaries between real and make-believe and the all-too-real sensation of trying to find our way around a world we can’t make sense of.

21. The Picture of Dorian Gray by Oscar Wilde

In this chilling novel, the titular character, Dorian Gray, is the subject of a portrait by painter Basil Hallward, who is enamored of Dorian’s beauty. Knowing that his youth will fade eventually, Dorian wishes to sell his soul for beauty and youth, and his wish is granted. As Dorian grows more beautiful, his painting mysteriously takes on an increasingly monstrous appearance. Hauntingly descriptive and delicately crafted, Wilde’s novel challenges us to look within ourselves and acknowledge the darker side of human nature and the struggle between good and evil that each of us face.

22. Murder on the Orient Express by Agatha Christie

In one of Christie’s most compelling mysteries, the luxurious Orient Express is stopped in a snowdrift in the dead of night, and the next morning, a grumpy, dislikable American passenger is found stabbed twelve times with his door locked. Only the other passengers can have been the killer with the possibility of it being an outside job highly unlikely because of the snowstorm. As Detective Hercule Poirot investigates, a tangled tale is woven around the murdered man as each passenger is revealed to be connected to him. With her usual flare for intrigue, Agatha Christie gives us a mystery that blurs the boundaries between legal and moral justice, challenging us to decide when, and if, it’s ever justifiable to take the law into our own hands.

The most-translated book in the French Language, The Little Prince is the story of a little boy who falls to Earth from an Asteroid after visiting several other asteroids to try to understand mankind. In his travels he meets a series of strange and delightful characters, including a king with no subjects, a drunkard who drinks to forget about the shame of being a drunkard, and an untamed fox. The Little Prince is an allegory about the foolishness of man and man’s tendency toward self-destruction through violence, as well as a heartwarming tale of the transformative power of friendship and trust

24. The Fault in Our Stars by John Green

A Compelling, touching story, The Fault in Our Stars recounts the experiences of Hazel, a teenager with cancer, and the experiences of the other teens in her cancer support group. As together they share their fears and their joys, readers come to appreciate the fragility of life through these young voices whose lives are at once burning with intensity and flickering on the point of dying. Green captures the struggles of terminal illness with tenderness and amazing authenticity, reminding us that love, friendship, and faith transcend all, even death itself.

25. The Wonderful Wizard of Oz by L. Frank Baum

A classic and must read novel about adventure and magic, The Wonderful Wizard of Oz tells the story of what happens to little Dorothy Gale when she and her dog, Toto, are caught up in a cyclone and whisked away from their Kansas farm to find themselves in the land of Oz, where they meet a host of colorful characters including the Scarecrow, the Tin Woodsman, and the Cowardly Lion. Together they journey to the Emerald city to meet the celebrated Wizard in a quest for knowledge, love, courage, and a search for home. Immortalized in its famous adaptation starring Judy Garland, the novel is a heartwarming story about friendship and bravery, about appreciating what you have, and never forgetting that home is where your heart is.