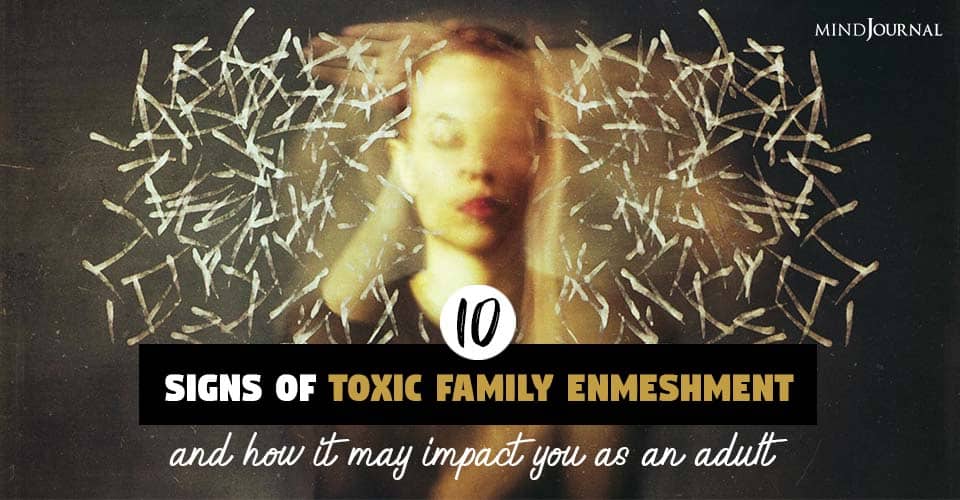 Now assess how you feel. Do any of these signs ring a bell? Does this list describe your family in a scarily accurate way? If so, you can bet your bottom dollar that you’ve struggled with toxic enmeshment growing up.

Related: 5 Helpful Tips To Deal With Toxic Family And Save Yourself

Why Did Your Parents Create an Enmeshed Environment?

“Your children are not your children. They are the sons and daughters of Life’s longing for itself. They came through you, but not from you, and though they are with you, yet they belong not to you.” – Kahlil Gibran

There are a number of different reasons why your parents created an enmeshed environment growing up – mostly, the reasons were unintentional and unconscious. In other words, your parents likely did not deliberately set out to put a stop to your mental/emotional differentiation … it kind of just happened.

But why? And how?

The first reason may have been that you experienced a dangerous illness, trauma, or significant issue in school that caused your parents to become protective of you. As you grew older they struggled to let go of the role of the protector (fearing you would become vulnerable again) which squashed your development.

The second, more common, and likely reason enmeshment occurred was that your parents learned it from their parents growing up. If your grandmother or grandfather were overly involved in your parent’s life, this style of parenting may have been passed along as a toxic cross-generational pattern. The root of this behavior is fear, and this fear can spread like a virus.

“What is there to be fearful of?” you might wonder. There are many reasons why parents are scared of letting their children develop mature identities.

… and many other complex fears which cannot fully be covered here. Here you might like to pause and ask yourself, “What fear was at the root of my parent’s behavior?” Take a few moments to reflect.

Related: How Adults Can Get the Distance They Need from Toxic Families

How Enmeshment Impacts Us As Adults

Enmeshment is a pattern that becomes deeply embedded within us. As adults, many of us are so oblivious to it that we can go years, even decades, without understanding what is happening to us in our relationships.

With enmeshment, we were raised to see ourselves as an entity, as “us,“ instead of being raised in a healthy family dynamic that permitted us to be our unique selves.

Let me tell you about a textbook case of toxic family enmeshment that came from my own childhood.

Growing up, I was raised in a fundamentalist Christian family. My family believed that their religion was the “one true path” on earth and everyone who didn’t have the same beliefs as them was destined to burn in hell eternally as decreed by an “unconditionally loving” God. I shit you not. This is actually what I was raised believing.

Thankfully I cut away from all that BS in my early twenties. It has taken me years to understand just how toxically enmeshed I was with my parents – which they likely adopted from their own parents. I remember my mother saying, “If mother ain’t happy, ain’t nobody happy” over and over again growing up. Now, if this isn’t a textbook catchphrase of toxic enmeshment, I don’t know what is.