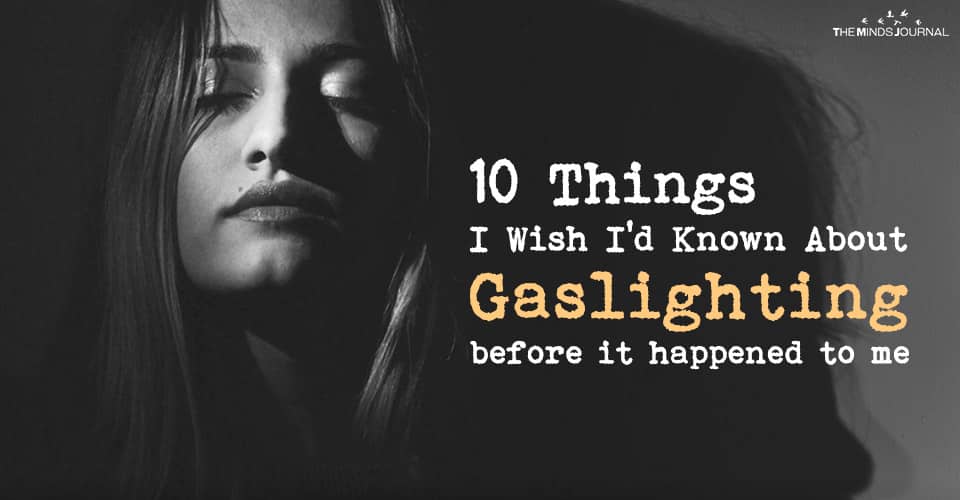 7. You Know What Your Truth Is – You Always Have, and You Always Will

Your gaslighter doesn’t see you.

You are a shadow standing to the side, trying not to attract attention, while they shower their image of you with love and attention. And no matter how much your mind is in knots, you know this to be true.

You know the space you occupy, even if you hate yourself for it. If you look back, if you look inside, you will see that you always knew that something was wrong.

It may feel like you lost your core. But it was always there.

The alarm system always worked. You just learned to stop listening to it. You have not lost as much as you think.

8. The End Game Is Not Confrontation, It’s Non-Engagement

A really common trope I see in movies and literature is the survivor who confronts their abuser. They confront them years later, and in that moment show themselves and their abuser that they don’t have to be afraid anymore.

I crave that catharsis because I am afraid. But I can never address that fear through confrontation. I can only address it by confidence in my ability to set and enforce my own boundaries.

When you engage in any way, you tell your gaslighter and yourself that your reality is up for debate.

Your reality is not up for debate.

If you’re like me, you’ve had a million conversations in your head, and it’s those conversations that are killing you. Your reality is not up for debate. You don’t have to rehearse for a conversation that you will never have.

It’s ridiculous when someone tries to tell you who you are, what you feel, what you think, what you intended, or what you experienced. When it happens, you should be angry, puzzled, or maybe even concerned for them.

You might stop, stunned, and ask, “What would make you think that you could know what’s inside of me? Are you okay?”

Instead, many of us will find ourselves trying to reach understanding.

And this is a reasonable response – to a point. But if the goal of the conversation is to exchange power, and not to exchange understanding, you will never, ever, ever win.

I would like to propose that one solution to feeling less susceptible to gaslighting is to learn how to identify the objective of a conversation.

A conversation with the purpose of mutuality should not make you feel afraid, ashamed, disoriented, or confused.

You can solve a lot of things with communication, so long as the objective of both people is understanding. But the minute someone tries to replace your experience, it’s time to stop communicating, at least on that subject.

9. You Must Confront the Threat

Every gaslighting exchange exists under the shroud of some kind of threat. For my relationship, the threat started out as disapproval, then it was the relationship that was threatened, and eventually, the threat escalated to his own life.

I had no ability to confront or resist the gaslighting until one by one, I confronted the fears that these threats produced in me.

I grieved. I spent a week in bed and cried over everything I had poured into the relationship. One by one I tried to internally break my attachments to the things that made me feel trapped.

I cried over the immense shame I felt and tried to build the strength to be able to hold it. First I grieved the family that I wanted so much to be a part of. Then I grieved my relationship with him. Finally, I questioned whether it was right for him to make me responsible for his life. It wasn’t easy.

And it was another six months before the relationship ended. But when I realized that I didn’t want to be in the relationship anymore, I had already internally confronted the threats that were waiting for me – and as one by one they came out in full force, I was able to put one foot in front of the other and walk out the door.

10. Gaslighting May Be Amplified in Families, Poly Relationships, and Other Groups

It’s hard to stand firm when one person is trying to replace your experience, but when they have a chorus of supporters, it is nearly impossible. There is a reason why cult abuse can lead to a complete breakdown of someone’s personality.

I can’t easily explain the level of shame and fear that a group you’re deeply invested in can produce with a coordinated attack. We need to be very careful of this in poly groups so we do not exploit this power or unwittingly enable abuse.

I know there is a lot of shame tied up in ending a relationship, and no one wants to be the bad guy. But we all owe it to each other to not participate in relationships where anyone’s self-esteem is being degraded.

For more information on gaslighting, or to get support if you or someone you know is being abused, visit the National Domestic Violence Hotline or call 1-800-799-7233.