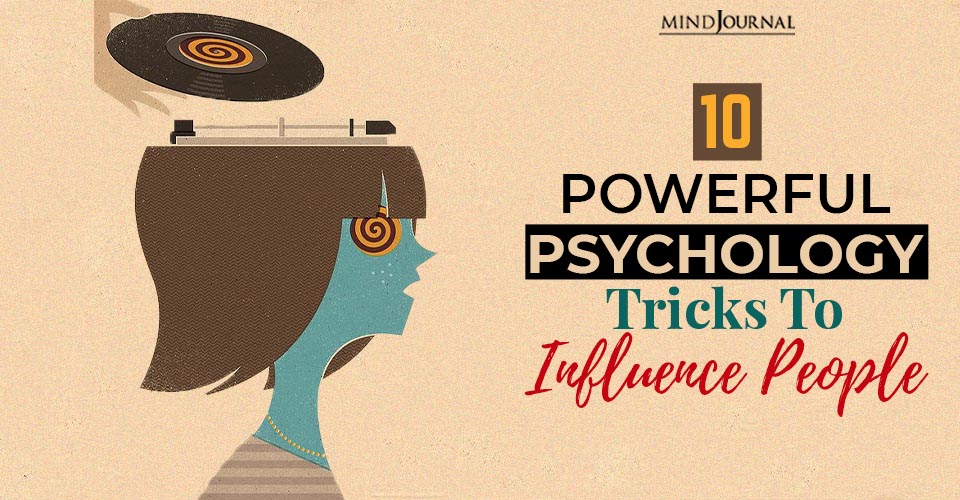 4. Make An Offer They Can’t Refuse

Trick: Start with a simple request that can’t be refused and work your way up to the actual one you want.

This approach is exactly the opposite of the door-in-the-face technique, where you begin with an impossible request and then scale down from there. Here you start off with a really small request the person can’t refuse. By making a request you know they won’t refuse, you’re getting them to make a commitment to helping you, to agree with you, and hence, the chances of this person agreeing to a bigger request that you later make are much higher. This phenomenon has been tested by scientists with regard to marketing.

Scientists began by convincing people to support causes related to the environment and rain forests, which was a straightforward request about something most people care about and hence, easy to get them to agree. It was observed that once the people had agreed to show support for the environment, it was much easier to convince them to buy products that promoted the welfare of rainforests and the environment. However, it’s not going to work if you make the easy request and immediately scale up to the bigger one. According to psychologists, you should give it some time (a day or two at least) before making the second request.

3. Keep Quiet When Someone Is Wrong

Trick: When someone is wrong, don’t point it out to them.

You may be tempted to correct someone who’s wrong, but never do that! As Dale Carnegie explains in his famous book, How To Win Friends And Influence People, pointing out someone’s mistakes does the reverse of making them fond of you. Directly telling a person that he/she is wrong hurts their ego to the very core. A polite conversation where you express your disagreement is a better way to go about it.

This technique is called Ransberger Pivot, and was invented by Ray Ransberger and Marshall Fritz. It’s pretty simple, they suggest that you don’t start arguing straight away, rather you listen and understand what they’re saying and how and why they feel the way they do. And when you begin talking, start by explaining the common ground that you share with the person, and then move on to explaining your views more deeply. This way you get a chance to correct them without hurting their ego, and they will actually listen to what you’re saying.

2. Repeat Back What They Say

Trick: Paraphrase their words and repeat back to show that you understand them.

A positive way to win people over and influence them is to make them feel that you understand their feelings and empathize with them. The technique called Reflective Listening works well in this regard. You just need to paraphrase their words and repeat it back- this is an effective way to connect with people. Research shows that reflective listening used by therapists creates a good therapeutic relationship between the patient and therapist. People are likely to trust and express more emotions when this method is used.

The same way, you can use this method while talking with your friends to make them feel more comfortable. Listen properly to what the person is saying, then rephrase it, turn it into a question, so that it confirms that you understand them. By doing this, you just proved that you care about them. Hence, the chances of them listening to what you have to say are higher, and they might even think of you as a good friend.

1. Nod While You Speak

Trick: Nod a lot while you converse with the person you want to win over, especially before you ask for a favor.

Scientists have found that nodding during a conversation have many positive effects. First of all, when you nod while listening to a person speak, it shows that you agree with the speaker. Moreover, it was also observed that when someone nods before your eyes, naturally, you will do the same. Psychologically speaking, this makes complete sense because humans are known to mimic behavior and body language they think will bring positive changes in them. So, nodding regularly during a conversation with the person you want to win over, will make you extra convincing. The person will find it difficult not to nod along, and he/she feels more agreeable towards you.