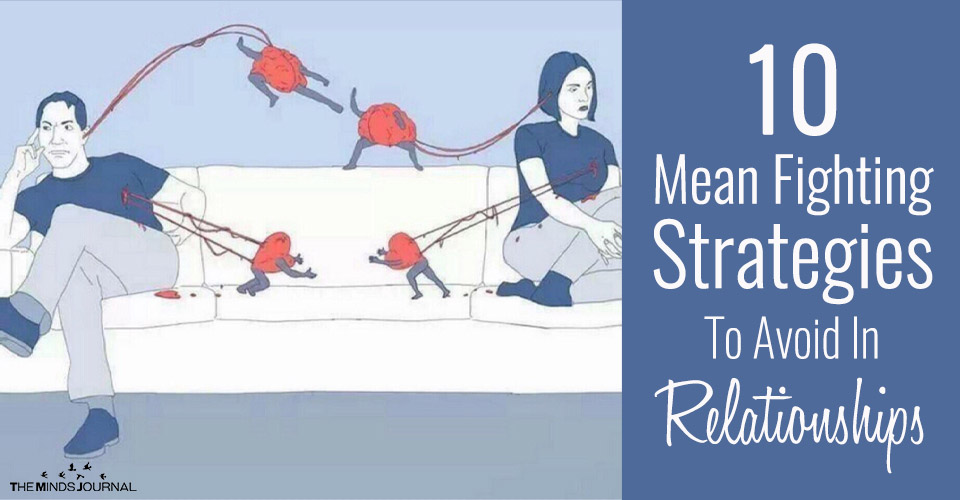 The farther away partners are from each other during a conflict, the easier it is for either of them to hurl accusations and insults without feeling responsible for the effect on the other.

The distance also allows the need-to-win partner who claims it to more easily assess the weakness of the other, and to take a more protected stance.

It also can alleviate guilt because the intimacy of closeness is diluted and responsibility for causing pain is easier to ignore.

Read 4 Toxic Behaviors That Are Ruining Your Relationship

During any disagreement, partners who care for each other know what they can use in an argument and what they must never say no matter how heated the conflict becomes.

They trust each other to never use the special knowledge they have of one another’s deepest vulnerabilities to win an argument.

The most serious and relationship-destructive conflicts occur when one or both partners break that trust by using the sacred information they know about the other to gain an unfair advantage during a confrontation.

An insidious but often effective strategy to win a fight is to begin beating oneself up on the other end of any accusation or challenge, and then blame the other partner for the exaggerated self-destruction.

These kinds of fighters act as if the other’s accusations were much worse than they were intended in order to make the attacking partner feel guilty and then back down.

In any committed relationship, threats of abandonment, exile, and escalated aggressiveness are needing-to-win fighting styles that are intended to make the other partner feel insecure and fearful of loss.

The goal is to use that response to have him or her focus on what might could be lost if the fight continues.

Whether they feel differently inside or not, partners who pretend they don’t care about whether they win or lose can actually win an argument by acting as if they are giving in without really agreeing.

The other partners can feel the ruse and know that they have essentially been robbed of power or influence by the “playing dead” posture of the other.

None of these needing-to-win fighting styles will ever lead to a productive resolution of conflict. Rather than the partners listening, respecting, or being open to each other’s experience, they continue to see only their own positions and to do whatever they can to wipe out the other’s reasonableness.

The arguments that ensue from these no-win battles create deepening grooves of resentment that become harder to overcome over time.

Once these negative fighting styles are identified and stopped, couples can begin to deal with conflict in more productive ways. They are ready to learn the rules of productive disagreements.

1)    Avoid arguing at all if you are tired, frustrated, or there isn’t enough time to adequately resolve the situation.

2)    Sit close to one another, preferably physical touching in some way.

3)    Listen completely to the other’s point of view. Support does not mean to have to see things the same way.

4)    Argue only one issue at a time. If others get brought up, agree to talk about them separately and only after you resolve the one at hand.

5)    Don’t add support to your position by using other’s opinions or past arguments to bolster your argument.

6)    Stop the conflict if either one of you escalates the need to win.

7)    If you cannot stop from employing a needing-to-win style when you disagree with your partner, seek out the support of a mutually respected professional or lay witness to observe.

Following these guidelines may initially seem hard, but they get easier over time. The compounding rewards encourage most couples to continue practicing them. Disagreements that are handled with mutual respect and support both enhance and strengthen the intimate connection between the partners in committed relationships.

My patients who have left this negative combat style behind and practiced this new way of conflict resolution not only have fewer conflicts and more successful results but heal more rapidly when they do disagree.