7 ﻿Signs Someone Is Trying To Manipulate You 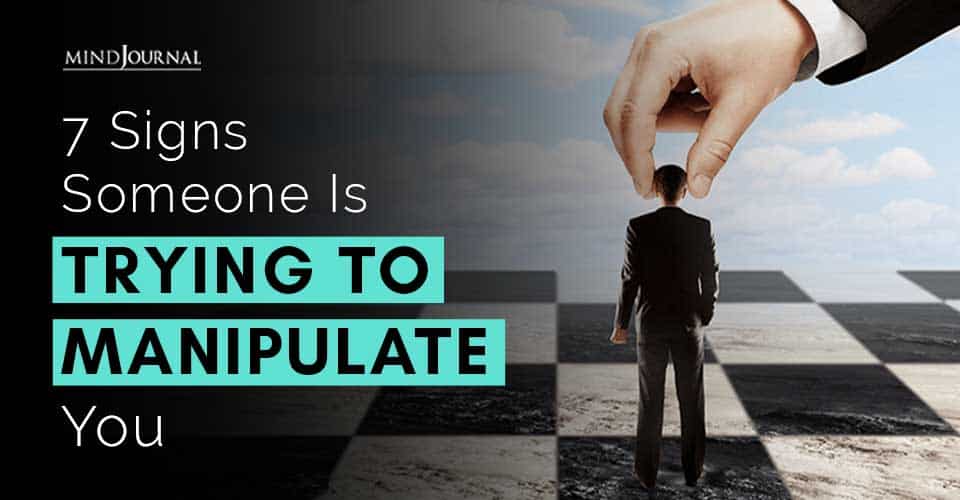 7 Signs Someone Is Trying To Manipulate You

When an empowered individual who possesses qualities of high emotional IQ enters into a love relationship, s/he isn’t knowingly signing up for a Manipulation of Grand Scale. However, in circumstances where a person has fallen head over heels for a narcissist (or other personality disordered individual), they are most definitely entering into a relationship in which they will be harmed by their seeming knight-in-shining-armor.

As part of their recovery, survivors of narcissistic abuse often perform a “postmortem” on their relationship in therapy regarding their narcissistic abuser. This autopsy of emotional abuse allows the survivor to recount and detect when the red flags of manipulation began in the cycle of abuse, thus fortifying the survivor and empowering him/her to be on the look-out to detect such warning signs in future relationships.

When a pathological person targets an individual for a love relationship, they have ascertained that the prospect has qualities that will generate a copious volume of narcissistic supply (or ego fuel).

Sandra Brown (2009) defines these characteristics as “supertraits” in her groundbreaking book, Women Who Love Psychopaths: Inside the Relationships of Inevitable Harm with Psychopaths, Sociopaths, and Narcissists. Desirable preferred qualities in a love object would include high empathy, cooperativeness, extraversion, competitiveness, goal-orientation, and ambition professionally, among other qualities.

These facets of personality are hardly the often-termed labels “codependent” or “love addict”, which serves to reinforce victim-blaming and shaming. On the contrary, pathological and personality-disordered people actually seek to extract ego fuel from highly successful, confident, caring, and beautiful partners.

Not to say that some targets may have their own trauma history blueprint which renders the pathological person “familiar” to the survivor.  Yet it is intriguing that NO ONE is immune from the potential predation of a narcissist/psychopath. That being said, there are red flags a person can look out for to be alerted to a potential manipulation before they allow themselves to fall head-over-heels with Mr./Ms. Too-Good-To-Be-True.

How to know if someone is trying to manipulate you?

Signs that a person has potentially encountered a manipulative dating partner with possible nefarious intentions are the following:

At the beginning of a relationship with a narcissist/psychopath, targets describe being literally swept off their feet and being caught up in the rapture of the effects of love-bombing.  This manipulation tactic is a pathological person’s attempt to hook their partner into the intoxicating high of the idealization stage of the relationship.

Related: 3 Mental States That Narcissists and Sociopaths Change in Others

The abuser makes themselves so relevant and omnipresent that the love object becomes laser-focused on their new love, to the exclusion of anything grounding her in logic and reality-testing. Often targets report feeling rushed into the relationship and not having the time to discern how they are truly feeling about their lover, being that chemical cocktails of oxytocin, endorphins, and dopamine are surging during the time of hastened pacing of infatuation.

This “other-worldly” experience is literally intoxicating for the target, who feels like s/he is high on the best mood-elevating drug ever…and s/he is…with the love-bombing cocktail her narcissistic partner has thrown at her like a grenade.

The target easily bonds to the abuser because s/he is capable of true intimacy, empathy, and vulnerability. The narcissistic abuser can attach to their partner but they cannot bond in a healthy way and easily detach like a leech, once the initial rush of ego fuel has them satiated.